In 1875 a committee was formed of the five non-conformist chapels in Shepshed, Charley Way Baptist, Belton Street Baptist, Primitive Methodist, Wesleyan Methodist and Wesleyan Reformed, to consider the provision of a school.

Application was made for the use of Charley Way Chapel Sunday School rooms and on 15 August 1875 there was a meeting of non-conformist friends in Shepshed after evening service and the Charley Way Baptist Deacons agreed to let the schoolrooms for an Inter-Denominational Day School.

On 3 January 1876 , a “British School “ was started on our premises as a public elementary school - the headmaster was Thomas Higman and 4 classrooms were used. J Atkins was the caretaker. Subsequently, land was purchased in Hall Croft for a new school building, and Foundation Stones were laid on 14 March 1884. The British School left Charley Way Baptist for the new building in the Hall Croft which was opened in 1885, when 23 leading non-conformists headed a procession of scholars from Charley Way Chapel to the Hall Croft premises. 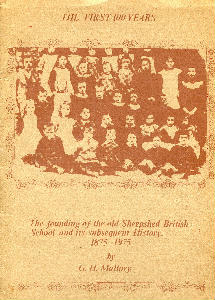 Click on the picture to read a pdf of

The Centenary of the British School

Baptists had always been to the fore in the realm of education and one hundred years ago our spiritual forefathers at Charnwood Road or, as it was known then, Charley Way Chapel, together with other non-conformists in the town, were moved to consider providing a school for children whose parents did not wish to send them to the schools provided by the Church of England and Roman Catholic authorities of the day.

Owing to the school holidays, the centenary of the first non-denominational school in Sheepshead was celebrated in November. As this school was started in the schoolroom of Charley Way Chapel, a Service of Thanksgiving was held there on Friday evening 7 November 1975. The preacher was Rev Dr Ernest Payne, former secretary of the Baptist Union. The service was conducted by Rev S Harris, pastor of Charley Way Chapel and the church was full.

From this venture, initiated one hundred years previouslt by the non-conformists of Shepshed, there has emerged, through developments in the educatinal system, the Hall Croft School and Hind Leys Community. It can rightly be said that these schools and the new Hindleys Community and Upper School which opened in August 1976 , are the outcome of the christian Gospel.

Again on Tuesday November 11 the chapel was full, this time with present pupils and former pupils and teachers of the Hall Croft school. After a short service conducted by Rev S Harris and the scholars of Hall Croft School, a procession, led by Mrs Nichols, present head, Mr Mallory, former head, Rev Harris, representatives of former heads, governors and ex-pupils went into the Bull Ring for a hymn. The scholars, dressed in Victorian costume, then proceeded along Field Street to the Hall Croft school, to commemorate the school vacating the church premises and occupying the new school building which had been built when Charley Way schoolroom became too small for the children.