Shepshed is a small town in the Charnwood Borough local government district of Leicestershire, having a population of some 14,000 inhabitants. It has grown enormously over the years. It was recorded in the Domesday Book in 1086 as Schepeshefde Regis with 76 men living there; women and children were not recorded. 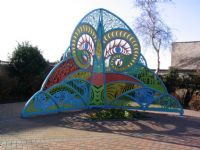 There have been many different spellings of the name over the years i.e. Sceper(s)hefde, Scepeshefde, Shepesheued, Schepeheued, Schepeshede, Schepesheved, Schepeshede, Sheyshed, Schepished, Sepshed, Sheepshead, Sheepshed, and in 1888 it became Shepshed.
The name comes from 'King's hill where sheep graze' and surrounded by lush pastures sheep certainly played a large part in the history of Shepshed.

The prosperity of Shepshed was based on the wool industry and its wool became famous and sold very well, particulary in Lancashire and wool merchants came from far afield to obtain our wool congregating at Well Yard on Forest Street to buy from local inhabitants.

Shepshed was a very busy and thriving little town, self sufficient in every respect. At the rear of many premises were the famous stocking frame shops and many other businesses including several blacksmiths amongst them, because horses of course were the only means of transport in those days.

For many years Shepshed was a textile town, mainly hosiery, but over the years these industries have closed down and since the construction of the M1 motorway, Shepshed has become more of a commuter town. It is almost equidistant (about 15 miles) from Nottingham, Leicester and Derby and only 5 miles from Loughborough and many inhabitants travel each day to their work there. 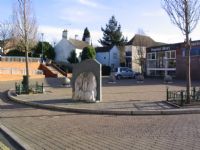 There are 7 churches in the town: 2 of them Baptist, our own at Charnwood Road and Bethesda Baptist Church. Other churches include St Winefride's Roman Catholic Church, St Botolph's Church of England, Christchurch Methodist Church  and the Tree of Life Church. Recently Belton Street Baptist Church and the Independent Evangelical Free Church merged to form the Word of Life Church in the new building on Kirk Hill.
In the centre of Shepshed is our very popular Library- see photo to right. 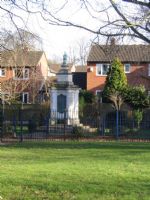 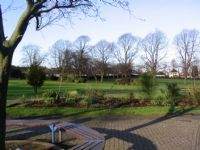 The War Memorial is now situated in the Glenmore Park, having been removed from its former place in the Market Place. On the edge of Shepshed, on the road out to Hathern, we have an old
Watermill that is occasionally open to visitors. It is well worth having a look at.