Ruth and Bob Ellett
- working for BMS in Nagaland

Click here for 2 May 2007 update from Bob and Ruth

Howard, our Minister, had a chat with Ruth and Bob today to hear that they had at last reached Dimapur after what turned out to be a very difficult journey of 10 days. The long delay on the journey was caused by their luggage not reaching Calcutta when they did. They had to wait in Calcutta for their luggage to be reunited with them before they could travel on to Dimapur. However while they were there they were able to acclimatise and they met quite a few interesting people and even attended a Keswick Convention.

Workwise the hospital is as big as Leicester General but on 7 floors. The team out there have to install 13 lifts and build generators to work them. They also have to fit air conditioning to the whole hospital.  It is an enormous task for Bob as supervising engineer. Although the younger workers are working 10 hour days, six days a week Bob is working 10 hours a day for five and a half days per week.

Ruth is also very busy preparing food for the various visitors to the guesthouse where they are staying. There is a German delegation there this week. Bob has had an upset stomach as everything seems to have garlic in it and it doesn't suit him but is beginning to feel better.


Ruth and Bob Ellett set off for Nagaland 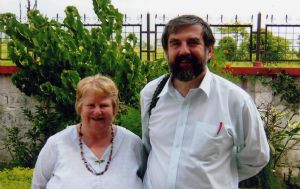 On Wednesday 7th February 2007 two of our church members set off to go to Nagaland. However they and their luggage lost contact between Heathrow and Calcutta. At the moment they are staying in Calcutta until they and their luggage have been reunited and they will set off for Dimapur to work on a hospital there.  At present the hospital is an empty shell and Bob will be doing the electrical engineering at the hospital which is hoped to be completed in the five months they will be there. During this time they will be living in a guesthouse and Ruth will be working there.

The weather in Dimapur is very hot and the monsoon season is just about to start.  Please pray for Ruth and Bob as they acclimatize and keep them in your prayers as they embark on this project.