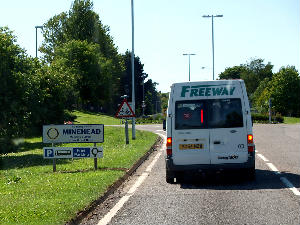 It was a bright and sunny Sunday morning as 23 of us set off in two minibuses on 26 June heading for the Somerset resort of Minehead for the Church holiday.  Pete Bassford was at the wheel of one minibus and Barry Newton and Rod Hesling shared the driving in the other vehicle.  A quick trip down the M1/M69 motorways soon saw us heading down the Fosse Way (A429) for the first leg of the journey.  A short break was taken at Moreton-in-Marsh before busy traffic saw us divert via Cheltenham to the M5 and our second stop of the journey.  A further stop as we left the motorway at Bridgewater and then it was a more relaxing drive, for the passengers at least, across the Somerset Levels and through the edge of the picturesque Quantock Hills until we reached Minehead in the late afternoon. 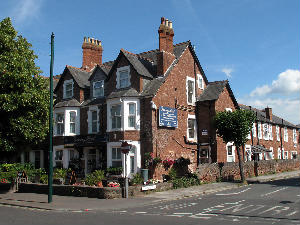 The welcome sight of the Gascony Hotel soon greeted us and in very quick time everyone was settled in his or her rooms and ready for Dinner which turned out to be, as with all the other meals during the holiday, very good indeed, and then it was a quick walk before bedtime to become familiar with the layout of the resort. 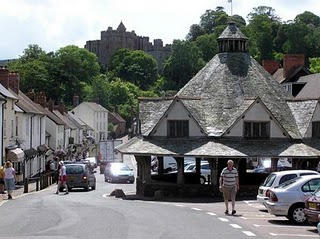 Monday dawned a bit on the dull side and most people spent some time out in the main centre of Minehead before we gathered in the coaches and drove out to the nearby National Trust property at Dunster Castle, by which time, sadly, it had started to rain lightly.  The rain finally ceased and everyone had an interesting time exploring the castle’s magnificent rooms and gardens, and most also ventured down to Dunster village with its Yarn Market and where a selection of delightful shops and tearooms were available in which to pass the time, plus the magnificent Priory Church of St.George and its memorial garden which were also nearby.  The short drive back to the hotel meant there was plenty of time to relax before another excellent dinner. 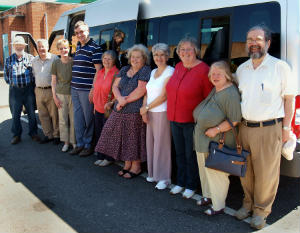 Everyone agreed that a day out further away would be the best idea for Tuesday and so the minibuses set off for the first stop at the village of Porlock which gave the opportunity for all to enjoy a short walk and mid-morning refreshments.   Then it was on to Combe Martin, a coastal village on the North Devon coast, where time was taken out for a lunch break, and then the final leg of the journey saw the party arrive in Ilfracombe where the afternoon was spent enjoying the shops and resort.

The journey to Ilfracombe involved some quite tortuous roads, which several members of the party found a bit uncomfortable, so the return journey was made over a less demanding route across the roads of Exmoor.  At least though, the weather had been, on the whole, better than that of Monday’s.

A later start on Wednesday saw the party depart for the nearby village of Horner, a tiny collection of stone cottages not far from Porlock and the Horner Woods estate managed by the National Trust.  Sadly it was once again fairly dull during this visit, but not too dull for the party to enjoy a pleasant lunch in the garden of the village tearooms. 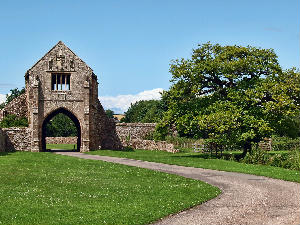 Back on the buses it was only a short ride out to the English Heritage site at Cleeve Abbey, by which time the weather had improved greatly.  This partly ruined Cistercian Abbey has been restored and boasts, reputably, the finest set of restored cloister buildings in England.  Sadly the Abbey fell into its ruined state following the dissolution of the monasteries by Henry VIII in 1536.  Quite a long time was spent at Cleeve where everyone was able to admire the ruined buildings and enjoy the peace and tranquillity of this site and its beautiful surroundings just a few miles outside the village of Washford.

Finally we drove just a short distance down the road to the Torre Cider Farm where we were able to enjoy some afternoon refreshments, of the non-alcoholic kind, and be entertained by a sty full of Mother and baby pigs, chickens, and other delights one usually finds at such places, oh and have the opportunity to taste and purchase the Cider produced at the farm! 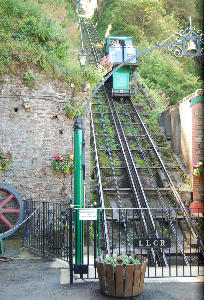 Thursday dawned bright and sunny and it was all aboard for a longish day out to Lynton and Lynmouth.  Another journey through the beautiful scenery of the country lanes and villages, and across Exmoor, saw us arrive in Lynton, which is the small town at the top of the cliffs.  A quick coffee and then it was time to board the famous Cliff Railway, that was opened on Easter Monday, 1890, to travel down over 500 feet to the resort of Lynmouth below. 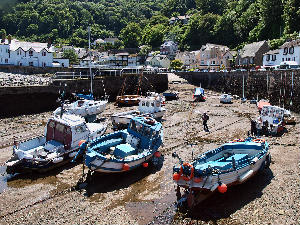 The resort is famous of course for the devastating floods that took place in August 1952 and there is a display telling the history of this event in the museum down in the shopping area.  There was plenty of time to stroll and sit in the lovely sunshine, although out in the open a keen wind meant jumpers and jackets came in very useful.  Another journey back across Exmoor, where quite a number of sheep and cows lined the roadside to greet us as we passed, saw us arrive back at the hotel well in time for Dinner at 6.30pm. 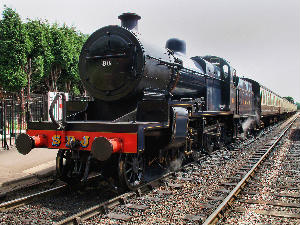 Our final day in Minehead on Friday was spent, during the morning at least, by some members of the party playing the now traditional game of Crazy Golf in the seafront gardens.  Others spent time browsing the shops for last minute gifts and bargains, or generally relaxed.  At least there was no call upon our drivers to take the minibuses out that day. 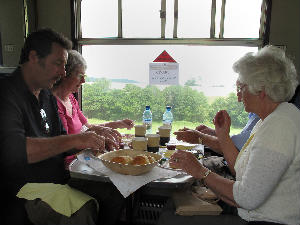 At lunchtime we gathered on the platform of Minehead Railway Station and boarded the 12.25pm.departure on the West Somerset Railway, a preserved steam heritage line, for the 20 miles journey to Bishops Lydeard in our previously booked carriage.  A short wait of about 45 minutes at the other end ensued before we rejoined our carriage for the return journey back to Minehead.  It was at this point that Howard had excelled himself arranging the holiday as he had booked an on-train Cream Tea for each of us beforehand and so the early part of the return journey was rather quiet as Scones, Jam and Clotted Cream were hastily dispatched by all.

Once again there was time to spend in Minehead before dinner, at which Howard made a short speech and presented the hotel chef and staff with a small gift to share between them as thanks for the excellent way they had looked after us during our stay.  Small presentations were also made to Howard and the drivers from us as thanks for all their efforts on our behalf.

Saturday morning saw a speedy getaway with a long journey in front of us, and a deadline in which to return the minibuses.  Again the journey between Minehead and the M5 was very attractive and scenic, but of course the motorway, as it always is down towards the West Country, was quite busy, so after stops for a morning break and lunch a diversion round Evesham, Stratford and Warwick saw us arrive back in Shepshed during the late afternoon.

Once again the holiday was enjoyed by all concerned and I am sure everyone would like to thank Howard for all the work he put in making the arrangements, and not only that but also his short “Thought For The Day” messages before breakfast each morning which reminded us all just why we are able to enjoy each others company and fellowship on such occasions.