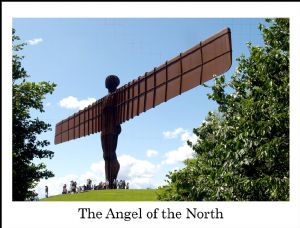 It was a bright Sunday morning on 19th.July when 21 people, in two mini-buses driven by Gillian and Pete, set off for Seahouses on the Northumberland coast.  Soon we were speeding along the M1 and on to the A1 before taking a lunchtime break at Washington Services.  Continuing on we then pulled off the A1 to pay a visit to the, now famous, Angel of the North sculpture.  Standing 66 feet high, with a wingspan of 178 feet, the sculpture was design by Antony Gormley and completed in February 1998. Pete then took us on a route through the centre of across the , which is a smaller version of the bridge across in .  After negotiating the suburbs of we were soon back on the A1 and continued on to the Beach House Hotel in Seahouses without further delay.  It was pleasing to note that the hotel has benefited from recent modifications and renovations and the lounge and dining room had excellent views out across the sea to a group of small rocky islands off shore.  After dinner most people took a stroll into the town for the first look around.

Monday dawned a nice sunny morning and after the short morning devotion it was agreed that a visit to Alnwick, with the famous garden and castle, would be the outing for the day, particularly as they were not too far away.  The gardens have been completely renovated under the auspice of the Duchess of Northumberland over the past few years and were absolutely delightful to wander in.  The main feature is, of course, the Grand Cascade, and every half-hour fountains and water jets give a magnificent display.

The castle next door is still home to the Duke and Duchess of Northumberland and is quite an imposing fortress.  Inside the castle has been refurbished and quite a lot of rooms are open to the public.  These contain a breathtaking collection of furniture and works of art, and of course it should be remembered that the castle has been used as “Hogwarts” in the Harry Potter films.  The centre of the town, just a short walk away, is a bustling hive of little shops and lots of traffic, but then it is one of the main tourist centres in the area.  I think everyone agreed that this was a very enjoyable day out.

It was decided to take the opportunity to have a good look at Seahouses on Tuesday morning so everyone went their separate ways until the afternoon.  Sue, Joyce and Irene took the opportunity to enjoy a boat ride out to the Farne islands where they had a good view of seals and various types of seabirds, including the Puffins of course.  Others just took a stroll round the small handful of shops or took in a round of Crazy Golf in the seafront garden. 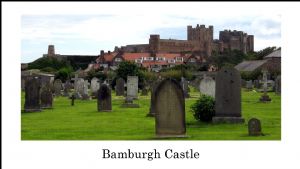 A short ride out to Bamburgh to visit the castle after lunch was the chosen trip for the afternoon but sadly for the first time since leaving Shepshed it decided to rain quite heavily.  This somewhat spoiled the castle visit and after a good tour round the inside rooms any idea of enjoying a walk round the outside or in the village below was given up and an early return was made to the hotel for dinner.  The castle though was very interesting, and just like Alnwick, the Armstrong family also still inhabits this one as it has since 1894.

A slightly longer journey North to Berwick on Tweed was taken on Wednesday morning for a full day out.  Once a major seaport in Scotland Berwick has changed hands several times over the centuries but is now firmly fixed on the English side of the border.

Full of a host of historic buildings Berwick also has its one-mile city walls still intact and several members of the party took the opportunity to walk all the way round.  One other famous landmark in Berwick is the over which the railway line from to crosses the river, and which has stood there since its completion in 1850, and several people also took the opportunity to go and have a look at this, although Irene drew the line at letting Barry visit the Railway Station! 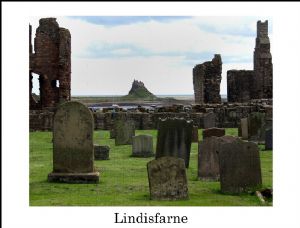 One of the “must do” activities on a trip to Northumberland is a visit to Lindisfarne, or as it is also called.  The party decided to go on Thursday morning as the state of the tide over the causeway linking the island to the mainland was at its most advantageous that day.  Along with seemingly hundreds of others we made our way across and managed to find a car park for the mini-buses.

Surprisingly the settlement there is quite large and there are the ruins of Lindisfarne Priory to wander in, the delightful parish church of St.Mary the Virgin to look at, both outside and inside and of course the castle which is now safely in the care of the National Trust.  Several people took the opportunity to walk out to the castle, some distance from the village, and Hilary and Alan enjoyed what they called a “power-walk” back to be in time for our departure.

There is also a nice selection of shops, cafes, restaurants and accommodation, although it must seem strange to the occupants how things differ from day to day as the day we went the causeway was due to close at 14.05 so all the days visitors would have gone by then leaving the islanders to live, at least for a few hours, in peaceful solitude. 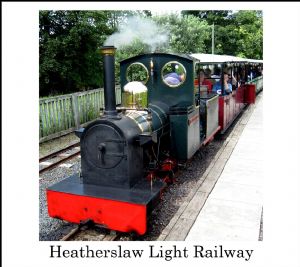 A short drive from Lindisfarne is the small and it was near here that the party boarded the 15-inch gauge Heatherslaw Light Railway for the 4 miles return journey to and from Etal.  Also at Heatherslaw were a visitor centre and an old mill, which has been restored.  A short ride in the mini-buses returned us to Etal and this beautiful quiet little village gave us the chance to relax in the sunshine for a while and most people took the opportunity to enjoy refreshments in the garden of the Lavender tea room besides visiting the plant nursery just across the road from which several purchases were made by Hilary, Pauline and Maureen, now there’s a surprise!

Again on Friday morning the party went different ways, one group taking the boat out to the Farne islands and the other down the road to Bamburgh, this time enjoying some time in the village itself.  The village has a lovely church dedicated to St.Aiden and in the churchyard is the very decorative grave of Grace Darling, the local heroine famous for her daring rescue from the sea of shipwrecked sailors in September 1838.  Some excellent gift shops and the Copper Kettle tearoom comfortably finished the morning visit off before the return to Seahouses. 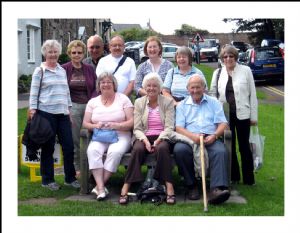 Not too far from Seahouses is the National Trust property of Cragside, the one time home of Lord Armstrong.  Famous for being the first ever home to be lit by hydroelectric power all sorts of other electrical innovations were much in evidence there as well.  The house is set on a hillside in an expansive forest and boasts forty miles of paths, a six-mile estate drive and a visitor centre so only a small part of the whole could be fitted in during our short visit.  Just as we were leaving to return to Seahouses it began to rain once again, only the second time during the holiday, how lucky could we be? 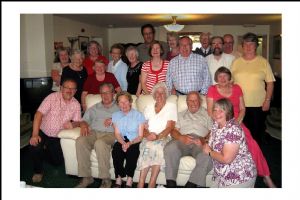 Friday also saw a major event for your erstwhile reporter in that it was my 65th.birthday, and my thanks go to everyone for the cards, their kind wishes and the lovely cake which seemed to disappear very quickly!

A swift departure after breakfast on Saturday morning saw us on the way down the A1 towards home but this time, because of roadworks, Pete guided us through the tunnel and we came out near Jarrow before following the alternative route to rejoin the A1 further South.  After a short lunch break some way further on we arrived back in Shepshed in the mid-afternoon safe and sound.

Once again this was a very enjoyable holiday in all respects and the feeling of fellowship was really good.  Everyone will, I am sure, agree with me that once again Howard has worked very hard to give us a good holiday together and all thanks must go to him for that, and we mustn’t forget either all the work put in by Gillian and Pete, driving us safely through the week.

Back to the top