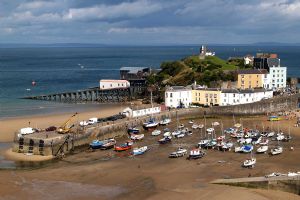 It was a bright and dry morning on Sunday, 20th.July when twenty-two people from the Church fellowship, and Gillian Clement from Quorn Baptist Church, left Shepshed in two mini-buses for the journey to Tenby for the Church Holiday.  A good run down the motorway network saw a mid-afternoon arrival at the Royal Lion Hotel on Tenby sea-front and soon everyone was settled in and exploring the delights of this lovely resort.  As luck would have it the Tenby Round Table were holding a “Party on the Beach” and lots of things were going on which culminated in a very good firework display over the harbour at 10.00p.m.

A sunny start on Monday morning saw the party boarding a small boat, after Hilary and Judi tried out the wheelchairs on the way to the harbour, for the journey across to Caldey Island which is about 20 minutes journey.  The island is owned by monks of the Cistercian Order and boasts a fine monastery and Abbey Church in which the monks live and worship.  In addition there are some small shops selling items produced by the monks, and there is also a tea garden, chocolate factory, lighthouse, the village church of St.David's and several well-worn footpaths around this lovely little island.  The return journey was made at low tide and meant a departure by an amphibious boat with a transfer to the ferry boat out in mid-sea, an experience not to be forgotten. 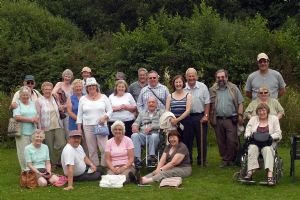 Tuesday morning dawned dull and misty, but thankfully dry, and a trip round the headland to the nearby resort of Saundersfoot was the desired activity.  Here everywhere is mainly flat compared to the hilly streets of Tenby and is much more like a small and traditional English seaside resort.  After lunch a short drive to Begelly Countryside Gardens was made.  These gardens sport a small sanctuary for rescued monkeys and 12 acres of mainly wild garden with lakeside and woodland walks, an oriental garden and an excellent tearoom which everyone took advantage of. 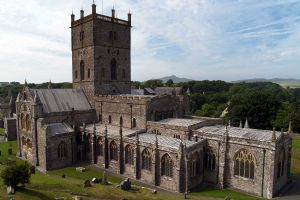 The cathedral of St.Davids in the town of the same name was the destination for Wednesday and on a sunny morning the party set off but made two detours on the way, the first being at Solva which is built next to a beautiful inlet from the sea, and which has a shop called “The Welsh Wool Shop” which was of particular interest to many of the ladies and then on to the nearby Solva Woollen Mill which is the oldest working mill in Pembrokeshire.  An excellent tearoom was the main target of attention here before the drive on to St.Davids at lunchtime.  The Cathedral at St.Davids is a beautiful building although somewhat plain in its outside appearance.  Unlike many of the countries buildings of this nature it is not particularly flamboyant in its design inside but it was a lovely quiet haven in which to walk round during the afternoon, and some of the members of the party took the opportunity to use the Lady Chapel for some time of contemplation during the 2.0p.m.to 3.00p.m.period set aside for this.

Wednesday finished with an early dinner before a quick journey to a local school to hear an orchestra from a grammar school in Nuerlingen in Germany give an excellent recital which included such lovely music as Gershwin’s “Rhapsody in Blue” and the Mahler’s Adagio which was used as the theme music for the film “Death in Venice”, all presented by about 80 very talented young people. 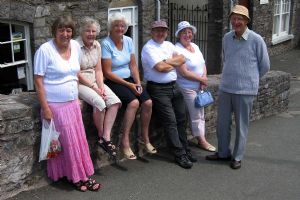 Pembroke Castle was the choice of outing for Thursday, and everyone enjoyed his or her walk around the battlements of this well restored building, except one member of the party who well and truly banged his head on a low arch, what a birthday present.  Once again good use was made of the excellent tearoom as well as enjoying the short walk down to the nearby shops.  The first choice for the afternoon was the lily ponds at Bosherston but unfortunately there wasn’t room for the minibuses in the car park so we journeyed instead to the nearby Stackpole Quay for a brief halt before returning to spend the rest of the day in Tenby. 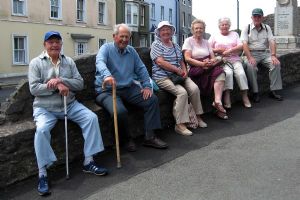 A late departure on Friday saw the party travel to the Pembrokeshire Motor Museum near Haverfordwest although most of the ladies, understandably, spent their time in the nearby Craft Centre, and then it was on to Picton Castle and Gardens. For most this visit started with a delicious cream tea before a stroll round these beautiful gardens, and the Walled garden was delightful with its lily pond and fountain and nearby seat to sit and enjoy the surroundings. 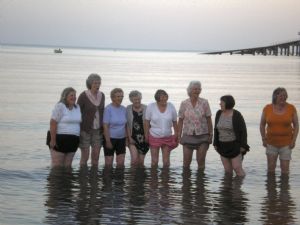 After dinner a number of the ladies decided a paddle was in order, and accompanied by Pete, who took the evidential photos, it was skirts up to the knees and in we go. Some of the paddlers wandered down to the Harbour where we saw the inflatable Lifeboat being launched and speeding off to a rescue. The Lifeboat Station was well worth a visit to see the bigger lifeboat.

An early breakfast and departure on Saturday saw the party wend their way back up the motorway network to arrive back in Shepshed about 3.30p.m.having had a very enjoyable holiday in each others company, which after all, is one of the main reasons for going together in the first place.

Thanks must go to Gillian and Pete for driving the two mini buses so expertly and safely, but even more so to Howard for making all the arrangements for the holiday, being so helpful whilst we were there, and for his very thoughtful interludes at the start of each morning before breakfast.